Field Music’s new album is the band’s first in three years, and if you’re expecting Futureheads style pep-punk, think again. Read my review for Blurt or check it out below.

Field Music has been on a three-year hiatus, with brothers Peter and David Brewis working on individual solo albums and touring with their other project, The Week That Was. Their full-scale rock band is back, however, with a 20-song behemoth of an album that manages to keep things interesting the whole way through, nary an ounce of filler to be found.

Field Music was initially lumped into the British pogo-pop revival along with bands like The Futureheads and Maximo Park (with whom the band has shared members). But the band has veered more into prog rock and classic rock territory, never more so than on their latest effort. Yes, a track like “Them That Do Nothing” delights in XTC-styled vocals and bright blasts of acoustic guitar, but the Zeppelin guitar riffs of “Each Time Is A New Time” are the norm, not the exception here. Dueling guitars, bass, drums, and sometimes strings wind and curl around each other precisely and economically. Many notes are played, flicks of the wrist and fingers allow grace notes and arpeggios to embellish the band’s melodies, but it all falls logically into place. In other words, Field Music’s musical accoutrements aren’t for show – they make the songs. The one oddity during the album’s 70-minutes or so is “Let’s Write a Book,” which is built around what sounds curiously like the Super Mario Brothers video game theme music. Still, if that’s the case, it never sounded quite so good, even with the occasional wah-wah guitar solo shredding overhead.

In all honesty, the album wouldn’t suffer from losing a track or two. But the cinematic, nine-minute, orchestral closing track, “It’s About Time,” sums it up in theme and title, marking an epic end to an equally monumental and always interesting new album.

MP3: White Fence – “The Love Between”

New Woodsist solo act, White Fence, will release a new self-titled album this April. But this isn’t some pimply teenager experimenting with GarageBand in his smelly room. No, damn it, this is Tim Presley, of Darker My Love, The Fall (on one album, anyway), and The Strange Boys, making very appealing lo-fi indie-psyche-rock. Download “The Love Between” here.

Norway’s Casiokids have the balls to sing in their native language. Seriously, you guys are never gonna make it unless you suck it up and sing in the world’s universal language of love and prosperity, one that binds all nations and cultures – thats right, Icelandic. The band has a new album coming out on Polyvinyl, Topp stemning på lokal bar, on June 8th. Until then, check out the first single, “Finn Bijkken,” here, and enjoy the Sigur Ros-styled high-pitched vocals and quirky electronics.

Back in high school, I used to be totally obsessed with ska and everything NYC ska-related. Yes, I admit it. These days are long gone, but the one band that continues to stand out, the one whose records I continue to revisit, is The Slackers. Vic Ruggiero and the band have a new album coming out in April on Hellcat full of rocksteady, dub, old-school soul, and, of course, ska called The Great Rocksteady Swindle. Download the first single, “Anastasia,” here. 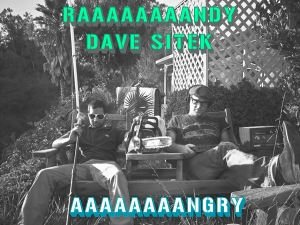 Video: Microphonies – “Cut Our Fins and Learn to Swim”

Blood Brothers are now almost all Past Lives, and I really like the new digs. Read my review for Blurt or check it out below.

The members of Seattle’s Past Lives may have all done time in the screamy, neo-punk-rock Blood Brothers, but you wouldn’t necessarily know it by listening to the band’s debut full-length, Tapestry of Webs. The group’s members have shed the sometimes painful histrionics, especially vocalist Jordan Blilie, for poppier yet still experimental song construction and texture instead of violent chaos.

The album’s opening tracks detail the new direction best – “Paralyzer” softly builds upon clicking drumsticks and a stately baritone guitar line (apparently, the band has no bass) before the atmosphere is thickened with volume and feedback. “Falling Spikes,” on the other hand, skips along briskly, slightly discordant guitar chords straddling the mix of low end amidst what sounds like soft horn riffs. Here, in the chorus especially, Blilie recalls shades of his past as a screamer, but he never quite reaches those Blood Brothers pinnacles. The band has made some effective album sequencing decisions as well, juxtaposing the hushed “Deep in the Valley” with the wonderfully grating “K Hole” (another song that employs some woodwinds, more Pharoah Sanders than Stan Getz here).

Tapestry of Web’s appeal isn’t immediate, but that’s also the key to its success. At first blush, songs like the eponymous “Past Lives” confound – all the pieces fit together into a pleasant pop structure without ever giving in to the saccharine joys of the genre. But who wants sugar when you can suck down the spice of Mark Gajadhar’s drumming and Morgan Henderson’s distended guitar string bends. Past Lives have created an intensely interesting record with a sound that is firmly locked into the future of punk rock. It’s not always as noisy, but it’s still poignant, political, emotional, and immediate.

Denmark’s Oh No Ono has made a nice new album full of unexpected twists and turns. Read my review for Blurt or take a look below.

Oh No Ono describe themselves as “experimental pop,” a simplistic summation that is a fairly accurate description of the Danish band’s carnival of sound. Twee-inflected, nasal vocals ala Mew or Figurines flit over an eclectic mélange of instruments, referencing sources including raga-fixated Beatles, 1960s psyche-pop, and driving power-pop. It’s all very cute, but it’s all very interesting.

The band’s domestic debut, Eggs, begins with the spacious and airy “Eleanor Speaks,” a mid-tempo psychedelic rocker augmented by warped Bollywood violins. “Icicles” also utilizes a good amount of orchestration, this time conveying a chamber-pop atmosphere with staccato stabs of overlapping strings providing a foundation for playful call-and-response vocals. Just when the band seems about to take an Animal Collective leap into the void, the track is reined in with a poppy Billy Joel-style bouncy breakdown. In other words, Oh No Ono veers titillatingly close to the edge of obscurity, but roots its sound in recognizable and satisfying pop structure. This is especially evident on “Helplessly Young,” one of the more conventional but effective tracks on the album.

As “The Wave Ballet” begins, a multi-tiered vocal chorus that the band recorded in an old Danish church swelling from the speakers, one begins to wonder if Oh No Ono is about to venture into a slightly too self-serious realm. Thankfully, the song quickly switches pace back to another half-creepy, fully innovative experimental pop tune. Once again, Oh No Ono seems ready to attempt any idea that strikes their fancy, sometimes several within the course of one song. But the band always knows how to bring their ideas back into a satisfying, if surreal, anti-formula of engaging songwriting.

“I’m of the opinion that if you have a platform to say something, don’t just say some bullshit. Use that platform to say something worthwhile – it doesn’t have to always be ultra-conscious or serious, but if every song you make is about bitches, cars, and drugs, you either live a very empty life or you’re a huge liar. Either way, I think an MC should be able to draw on their life experiences and translate them into meaningful songs, maybe even grow a bit after reflecting on it during the song writing process.”

Listen to “Go,” off of Thavius Beck’s new album for Mush, Dialogue, here.

MP3: The Library is on Fire – “Vanessa’s Theater of Peace”

The story goes like this: A guy named Steve Five moves to NYC following the suicide of a friend/bandmate. He meets Tom Verlaine at Strand bookstore. They enjoy numerous coffees together. Five engineers the likes of Oneida and USAISAMONSTER and makes friends with Robert Pollard. Listen to some of the results, “Vanessa’s Theater of Peace,” here.

The first person who can tell me what movie sample starts this track off wins my admiration and acclaim. Listen to Ulysses Campbell’s sweetly twee but effective nonetheless “Dinosaur Hunting” here.

**Thank you, Andrew, for pointing out that the sample is Jack and Hurley talking to each other on Lost. 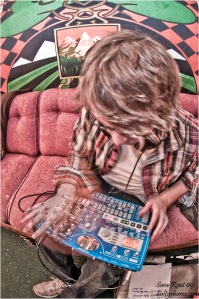 Here’s the album art for MGMT’s new album, Congratulations, due out April 13th on Columbia. Anthony Ausgang is the genius behind this technicolor cartoon. It hurts my eyes.

This is very Knife in the Water. Watch the new Liars video for “Scissors.”