Edward Sharpe and the Magnetic Zeros’ Alex Ebert contributed a song to Breaking Bad, and RZA decided he wanted to help out. Huh? Yeah. Download here: Alex Ebert – Truth (feat. RZA). And as I’ve said before, but just to be perfectly clear, Kueneman didn’t turn me on to this band, my wife did.

Download: Comet Gain – “An Arcade From The Warm Rain That Falls”

Comet Gain are back with a new album of solid, jangling, British indie rock, Howl of the Lonely Crowd, out this October. Download the first single, “An Arcade From The Warm Rain That Falls,” here.

Gauntlet Hair is a duo that makes the most of its limitations, creating a sound that’s spare but intricate, with shades of Sunset Rubdown circus weirdness and spindly early’-80s post-punk. Their self-titled debut is out October 18th on Dead Oceans. Download “Top Bunk” here. 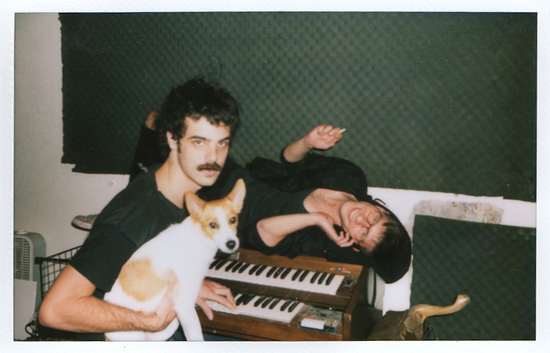 Toronto hip-hop ain’t nothing to fuck with, even if Drake never makes another sappy ballad. For a long time, the main source of new hip-hop music for our northern neighbor was radio show The Real Frequency. That show is no more, but the folks behind it have put together a compilation called The New North. Listen to one of the songs off of it, Shad’s “Flawless.”

Neon Indian has a new album on the way, Era Extrana, due out this fall. You can download a new song, “Fallout,” from his website, right now. The track is just about exactly what you’d expect: hazy, shoegazey, lo-fi electro-pop, kind of sleepy and kind of emo. Check out the new album’s cover art below.

Read my review of the new film by mumblecore innovators Joe Swanberg and Adam Wingard for Paste Magazine here.

Video: Vivian Girls – “Take It As It Comes”

Vivian Girls go even more Shangri-Las than usual in their new video for “Take It As It Comes.” It’s cute, but it’s also kind of cloying.